Capturing video from your screen can be tricky if you’ve never tried it in the past, and assuming you’re inexperienced you probably won’t know heads from tails as to where to begin if you wanted to record in High Definition (HD). By using the Movavi Screen Capture Studio however, you’ll find that the process isn’t really all that difficult.

Because the Movavi Screen Capture Studio emphasizes an intuitive and user-friendly approach, you should be able to figure out how to use it with minimal help. Most of its features and options are readily accessible and using them is a piece of cake.

When it comes to using it as a HD video recorder, all that you need to do is run the software and select the capture area. The option to do so is called ‘Select Capture Area’ and it will allow you to choose between a set of predetermined sizes or the full screen area. 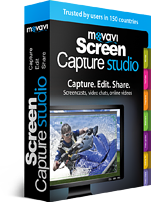 After that the only other setting that you really need to set is the frame rate. The frame rate is essentially the number of frames that are recorded per second, and for HD video 60 frames per second is optimal. If you go to the ‘Capture’ menu and select ‘Preferences’ and then choose the ‘Video’ tab, you’ll find the option for the frame rate right there and you can simply select ’60’ from the dropdown menu.

Since it is all set up, the next step is just to hit the ‘Rec’ button whenever you’re ready to start the recording. There are a number of other features that might come in handy too, including:

• Choosing the audio source by choosing between recording audio from the system or from a microphone.
• Setting a timer to stop the recording after a certain duration has passed.
• Taking screenshots while the recording is taking place at any point you feel necessary.

On top of that, once the recording is done you’ll find that saving it as a HD video is really extremely easy. With the helpful presets that are available, all that you need to do is open the ‘Save as’ list and find the ‘Video and audio formats’ section and select HD video. Once there you’ll be able to choose the format that you’d like to save the HD video as.

And that’s it – that’s all that it takes to record HD video with the help of the Movavi Screen Capture Studio.