Being able to capture your screen on Windows 8 will be tremendously helpful for various reasons. While screen capture has conventionally become synonymous with creating video guides and tutorials, it has other benefits too – such as enabling you to record Skype calls, as well as save online video streams and webinars.

Easy-to-Use Screen Capture Software
In a nutshell, if there is anything that appears on your screen in Windows 8 you will be able to record and save it with the help of Movavi Screen Capture Studio. But the reason why it is the perfect Windows 8 screen recorder is really due to its intuitive and user-friendly approach.

The user interface of the software will make it simple to find the features that you need, and applying those features should be equally straightforward. To start recording video footage all that you really need to do is set the capture frame by resizing the window, and click a single button to begin. That same sort of simplified process is used in most cases and a few clicks or some other basic actions are all that it will take. 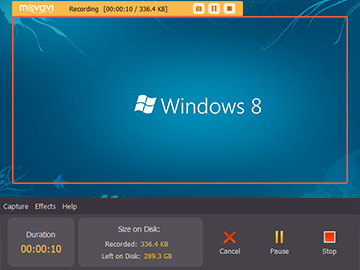 Comprehensive Features to Create Stunning Videos
When recording videos directly from your screen, Movavi Screen Capture Studio will give you full control over all the parameters – including the capture frame, audio source and frame rate. It will also allow you to decide whether or not you want to capture keyboard and mouse actions by displaying keys that are pressed on the screen, or highlighting the mouse cursor.

However the real power and potential of Movavi Screen Capture Studio lies in the additional features that it brings to the table. It is not only a screen capture software, but also provides you with numerous other features to edit and improve your videos by:

• Cutting and combining video segments to remove unwanted footage and merge clips together in any sequence.
• Applying special filters and effects to alter the visual style and appearance of the video.
• Improving the video quality manually or automatically and correcting any of the common issues with videos.
• Adding subtitles, captions, watermarks and other forms of customizable text.
• Inserting audio tracks to include background music or voiceovers.

With the help of these features it should be easy for you to take the video footage that you capture on Windows 8 and transform it into an attractive and professional-looking video. Assuming you want to create your own video content, these features will prove to be invaluable to give your video a polished sheen that distinguishes it from most other amateur productions. In short – you will be able to create videos like a professional, despite not having the experience of one.