As per google, this is just a beta test and Google will expand this interface to other publishers in the coming months.
To apply for this beta-test, just fill this Interest Form of Beta Test for Adsense New Interface 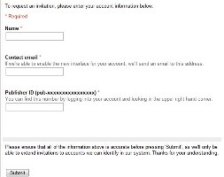 NOTE: Google will only send you an invitation if your account’s display language is English, French, Italian, German, Spanish, or Japanese.

Update: The Internet Giant has made available this new interface for all its publishers and now everyone can enjoy this new full-featured screen and see all his earnings and reportings in it. Now it is not limited to any particular user or country but is open for all.

Google has also integrated now ‘Reporting By Country’ and the users can see which country of the world is giving them the best efforts. It also helps in getting the traffic as you can then write specific to that country and target the people living there.