Apple launches ‘The Daily’, iPad-only magazine. The magazine was unveiled by Rupert Murdoch, Chairman and Chief Executive Officer of News Corporation at New York event on February 2, 2011. ‘The Daily’ is available in App Store.

The iPad-only magazine will not be updated on a minute or daily basis but it would act like as a daily newspaper. It is built exclusively as an app for tablet computing. It will publish around 100 pages daily. 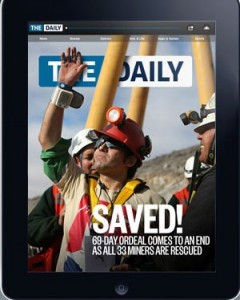 It will also contain Sudoku and puzzles etc. People would be able comment on the stories in audio as well as text format. Readers can bookmark the stories to read later and can share to Twitter and Facebook.
It will have weekly charges as 99 cents and if you pay for whole year in advance, the cost would be $39.99 a year.
As of start, The Daily has bureaus in New York and Los Angeles, as well as stringers across the country.

You can go to www.thedaily.com for more info.