Android is in space. Google sent its 7 Nexus S phones in the space.
These phones have Google’s Sky Map, Mobile Maps, Latitude, etc.

As per information given by Zi Wang of Google, Very useful data was collected by the payloads. Many of them were at good heights; the highest of them was at 107,375 ft. This height is 3 times to the height of an average commercial jet.

One of the payloads was also clocked at its fastest of 139 mph. 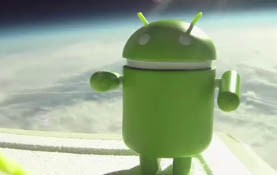 From this, Google also concluded that Nexus S could even withstand temperature of -50 C.

Please look at below 2 videos