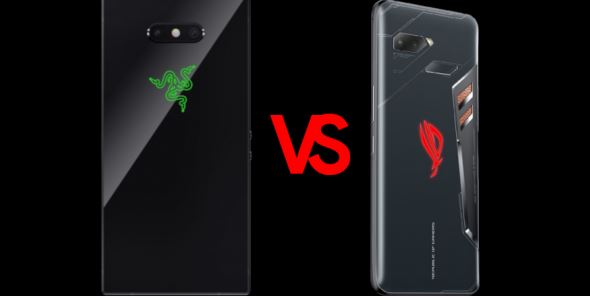 The gaming smartphones are in the market from quite some time but the real jump in the gaming mobile industry witnessed in the year 2018. In 2018, Asus launched its ROG phone in the month of June. Razer launched its first version of gaming Razer phone in November 2017. The phone did well but it was not able to capture a relatively good market as per the expectations of the company.

Thereafter couple of months, Asus announced its ROG gaming phone in June 2018 and released the phone in October of the same year. Razer became skeptical of this and it also launced its second version Razer Phone 2 in the same month and year October 2018.

We have done a side by side review and comparison of Asus ROG phone vs Razer Phone 2 and you can check the specs and review video to compare and decide that which gaming smartphone you should buy. The loophole with Razer is that it is relatively new in the gaming mobile industry and as such, it lacks the experience that Asus has.

Asus tried its best to brand the ROG separately from ZenPhone lineup but ROG phone still uses the light version of ZenUI software. The smart move that Asus did is that it packed its ROG gaming smartphone with so much awesome features that those features are amazing for a gaming smartphone.

Many of you would not have seen such specs in any other gaming mobile. But we cannot deny the hard work done by Razer Phone 2. They have tried everything to beat Asus ROG.

• Both the phones boast of Qualcomm SDM845 Snapdragon 845 processors and both have 8 GB of RAM.

• If you are the one who always keeps microSD card in his phone then at first instinct, you have to choose Razer2 as Asus ROG has no room for micro SD card. So, it means that if you want to insert the SD card in your ROG, you cannot do that as there is no card slot itself. ROG has favored the dual sim and so, it has left the option for SD card slot. The card slot of Razer2 is expandable to 512 GB.

I don’t know if only I am the only person who goes uneasy by pointed corners but I prefer Asus ROG as far as corners are concerned. As I see to gaming experience, Razer2 fits more easily in my hands but ROG also does well for me and it sticks in the grip of my hands.

• Both have Corning Gorilla Glass protection.

• Performance: Razer Phone 2 is offering 120Hz refresh rate while ROG is at 90HZ refresh rate. We can say that both the gaming phones are giving extremely fast performance and refresh rates.

• ROG has provision for FM radio but it is missing in Razer phone 2. But do you really FM radio that when there is provision of storing songs in mobiles now-a-days? • The battery of both phones is 4000 mAh. Both phones have Li-Ion non-removable battery.

You can check the below video which shows the unbiased review and comparison of Razer Phone 2 and Asus ROG gaming mobiles.