Almar and his development team from XDA Developers have installed Android Eclair 2.1 beta on Samsung Omnia 2 i8000 and the following things are working on the phone.

* Phone (calling to anyone or receiving a call).

Almar was unable to work some of the things on his Omnia 2:
* Unapproved of 2D/3D files by Omnia. So, the phone kept on freezing. 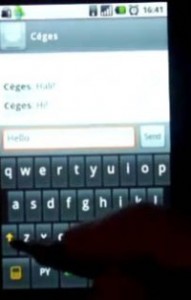 But he hopes that his team will soon find a solution to this.

The developer has also posted some of the features along with the phone models that he and his team was unable to fix. The list is stated below:

On some of the features, the development team is working continuously. They are:
• Camera.

• I920 : This is one of the most crucial feature on which the team is working as the model fully is unsupportable and the users of this model are eagerly waiting to get it work.

1. On your microSD card, we advise you to backup the files.

6. Place the extracted files in My Storage. Please make sure that you copy only the o2beta directory and ext2 tar, default text file, log text file, haret exe and zImage to the ‘My Storage’ root.

9. The device will reboot automatically.

10. It will boot with Windows Mobile.

11. Head over to ‘My Storage’ and click haret executable file.

12. The device will reboot and will show you an Android logo on the screen.

13. Hold button ‘Lock’ for three or four seconds and turn off the phone.

15. Copy the above files to ‘My Storage’ root and over-write.

16. From ‘My Storage’, run haret executable.

17. You will see that it is booting at a much faster speed as compared to when it was booted initially.

3. On Device Storage, install the cab.

2. In mass-storage mode, connect you mobile to your computer.

3. Open the ext2.tar.gz file. You can use any unzipping software such as 7Zip.

5. Unzip the lib zip file and copy all the three files.

6. Head over to ext2.tar.gz\\ext2.tar\\system\\app and copy all files here after unzipping the app zip file.

8. 7Zip will ask you for updating the archive. Confirm it.

10. After reboot, got to Home screen.

11. You will notice ‘Live Wallpaper’ option there from which you can change the wallpaper.