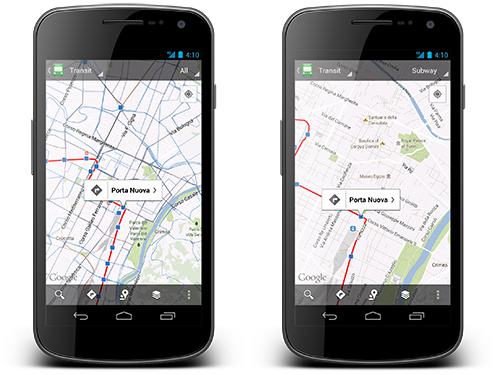 What comes in mind after hearing Google Maps is a huge database of public transit information. Google Maps are being appreciated and used by the people from all over the world. Christopher Van Der Westhuizen, Google Maps software Engineer, announced update of Google Maps that was pending for a long time. Over 1 million stops schedule information is there in the database.

There are 500 hundred cities added that includes places like New York City, Sydney, Tokyo and London. The new version that will be available to download is v6.10. Talking more about the Public Transit System, there are transit modes that users can select like Subway, bus and Train. This thing will help out in the areas where the layers are concentrated and it gets difficult for you to find a specific mode of transit system. So, next time you plan to catch a train, turn on the New Google Maps application on your Android and see only the Train route on your Smartphone.

Moreover, the information about layouts has also been improved. You will notice that when you tap on a specific transit station.

When you select any city or any specific region, the borders will be highlighted. All those users who are interested to explore the “My Places” feature on Google Maps will notice improvements in the layout. You can also select Google to start collecting data about the places you explore more frequently so next time, when you explore that place, it will be easy for Google to pull up information.

There is news that Apple is casting aside Google Maps service and is replacing Google Maps with its own Automatic Navigation Service for its own iPhone and iPad. May be the late upgradation of the Google app was due to this fact that Apple is launching its new app. There will be turn-by-turn navigation, a quick route button and flyover feature in the Apple’s Map service. This was announced in June and this service will be available when Apple will launch its new iOS6 that is expected in fall of this year. Well, we will see which service is better and we will present a comparison here on this blog between these two. For now, enjoy the new features introduced by Google.

If you are interested in this new update, it is available at Google Play now.