Curling sport that was first played in Scotland is very popular in the some of the English countries. Curling is a game played in between 2 teams, with four players in each of the team. The goal is to move the highly stones polished with granite across the ice-curling sheet towards the ice, the target marked on the ice and which is in circular shape. Each of the team gets eight stones, means 2 rocks (stones) for each player. Each member throws the rock towards the target. The rock closest to the circular target gets the maximum points and the farthest the minimum. The team that stores the maximum points is declared as the winner. There are around ten ends in each game, with each end completes when all the members end throwing their pieces. The points of all the rounds are summed up and the highest scorer is declared as the winner and the other loser. 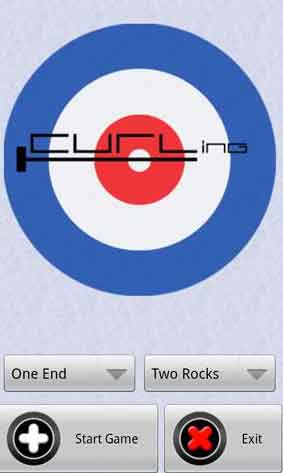 People love to play it day and today we are letting you know the way to play it on Android Mobiles. This is an app that is developed by Hexwave Ssi.

Open the app on your phone. Place the arrow on the ice. The target can be dragged around the area which is in front of the house. This target will provide the line for your stone. Set the arrow and still it when you think it’s at a proper position. Once you are ok with the position of your arrow, you can click the OK button.

You have to select the handle for your stone. For this, you need to click either the right or the left arrow. The speed will be visible at the screen-top and you need to lift your finger when you think that the desired speed is reached. Now throw the stone.

You can slide your finger through the screen of the smartphone to travel the stone forward in a straight line. The bar in the screen-top shows you the distance from the center of the house and helps you in tracking your speed.

When the rock stops, the screen will come back to its original state which is the Skip View and then you can repeat the process again.

You can download this app freely by going into Market

We hope that you will enjoy playing this Curling sport on your Android Mobiles.

Just comment here to let us know do you enjoy more while playing on field or on phone.