The Android Marketplace is one of the fastest growing application stores for smartphone users to browse. The unique design of the Android operating system makes it a boon for third party developers; however, with this ease of access also has come a host of problems in the form of malware. Just a few months ago, Google removed at least twenty malicious applications from the marketplace in order to protect consumers’ phones from malware attacks.

If you’re like me, then you’re always concerned with the security of your phone. You may have very important data, such as bank accounts and PIN numbers in your phone that you’d like to keep out of the hands of scammers. If you want to protect your personal information, then maybe you’d like to take a look at Webroot, the latest and best of the security applications for Android phones. 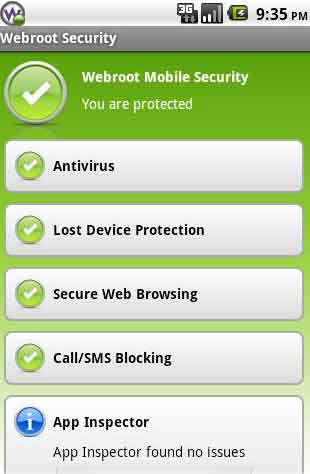 Webroot’s mobile security app is an extension of their large series of products intended to protect operating systems of all kinds. As with most high end apps, the Android Webroot app comes in a free version and a paid version that costs $14.99. Basically, the main difference between the paid and the free version is that the paid version offers you some added features, such as an App Inspector, a Device Wipe, and a SIM Card Lock. Check out their site for more details.

The free app still has some great uses. It offers a standard antivirus package to protect you from malware and software viruses that you might have inadvertently downloaded onto your phone; like any scanner, this one can be set to regularly check out your phone or scan newly downloaded apps. It also has a great little device locator/screamer to help you find your phone if you’ve left it at a store or lost it in your house. You can set up the application to lock your device, and it can also be used to filter and call blocker.

By-line:
This guest post is contributed by Lauren Bailey.