The Official NASA (National Aeronautics and Space Administration) App for Android is been launched and available to test and download on the mobile phones.

The app allows you exploring the amazing images and videos from the official website. You can know the America’s largest Research and Science center mission’s information, data and news direct from your mobile.

Know
• The videos from and around the agency.

• The upto-date information of the missions

• The launch data and the count-down clocks.

• The news from the topic areas.

• Links to all official centers.

• Maps of all the centers.

• The app also allows you to watch the Nasa Television online with Live Streaming. 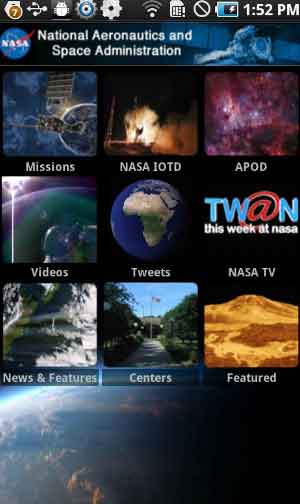 In reading above features, you might be thinking that how the world’s largest science-center can reveal its secrets to all. Obviously some missions require secrecy. So, I guess that the secret ones will not be exposed in front of all public and so you would not be able to know about them. But then also, apart from such missions, you will have all at your finger-tips just by checking into your smart phone.

So, come and explore America’s and world’s largest Scientific Center NASA on your mobile.

The app is available at Market