Follow these simple steps to tweak your computer’s Internet settings for faster connection.

IT engineers from Google and other Internet service giants forged a new DNS resolution standard to maximize Internet speed. Called the edns-client-subnet by the Internet Engineering Task Force (IETF), the new protocol is the hallmark of the Global Internet Speedup Project of Google and major DNS and CDN providers.

The Effect of CDNs and DNS resolutions on Latency

Content delivery network (CDN) servers store copies of web files hosted by the principal host of websites. Thanks to CDNs, the content of a website hosted in Washington can be copied and stored in cache servers located in Europe, Middle East, Africa, Latin America and Asia. A world without CDNs is like living in a place with only one retail store, the sole distributor of consumer goods. Some have to travel far just to buy goods, because the store has no branches.

But having countless CDN servers spread around the globe means dealing with multiple “addresses” for a single domain name. A website is identified by its domain name (ex. www.mysite.com) which is linked to one or more IP addresses (a series of digits), named so since they indicate the physical location of the server.

To visit a website online, a process known as DNS (Domain Name System) resolution has to be accomplished by one DNS resolver. By default, the DNS resolver of a client is its Internet Service Provider’s DNS server.  The resolver normally communicates with other DNS servers outside the network of the ISP. Such servers are known as recursive servers.

Simple as it may seem, the principle behind edns-client-subnet is nothing short of revolutionary. Only until last month, all leading CDN companies resolved DNS requests based on the location of the DNS resolver of the ISP instead of the client IP address. But what if the ISP server and the Internet surfer’s computer are hundreds of kilometers apart? The farther they are from each other, the higher is the download latency from the Internet users’ end. To illustrate, a web visitor in Texas could be downloading from a server in Beverly Hills because his ISP’s DNS resolver is in California, notwithstanding the fact that the desired cache server could be available in Texas.

As of now, only the IP addresses of Google Public DNS and OpenDNS servers can be used to implement the edns-client-subnet standard.
The default DNS address of most computers is provided by their respective ISPs via the Dynamic Host Configuration Protocol (DHCP). Just edit the address manually to enjoy the benefits of edns-client-subnet. The interface for configuring DNS resolver addresses varies from one operating system to another. Below are the interfaces used in Vista, Windows 7, and XP.

1.  Go to Start Menu.
2.  Click Control Panel.
3.  Double click Network and Sharing Center.
4.  Browse the left sidebar and click the Manage Network Connections link.
5.  You’ll then see your network connections. Right click the one you want to change, then choose Properties.
6.  Choose Networking tab on the top menu bar.
7.  Click either the check box for Internet Protocol Version 4 (TCP/IPv4) or Internet Protocol Version 6 (TCP/IPv6), and then click the Properties tab on the lower part.

8.  You’ll see a new window like the one below. Just click the button beside Use the Following DNS Server Address option. 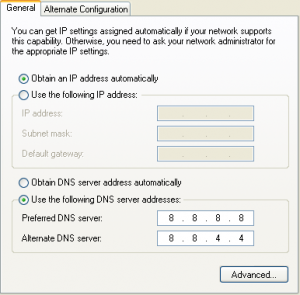 Any of these DNS IP addresses can be used as a primary or secondary server address. As for Google Public DNS, you can use either the IPv4  or IPv6 addresses or both.

Changing DNS Setting on Windows 7
This is the same as the Vista procedure, except for Step 4. The Manage Network Connections corresponds to Change Adapter Settings in Windows 7.

Changing DNS Setting on Windows XP
1. Go to Control Panel > Network Connections.
2. Right click the network connection you’re using and choose Properties.
3. Click the check box for Internet Protocol (TCP/IP).
4. Click the Properties tab on the lower part.
5. Below is a screenshot of the new window. Choose Use the following DNS server addresses and enter the Google Public DNS or OpenDNS IP addresses of your choice.