Standing high in the charts of the Android ‘free games’ category, this game provides a thrill based entertainment platform for car lovers while providing them with an opportunity to select their dream cars and drag them with opponents while winning and proceeding through their ‘career’ mode.

The game begins with the player having an initial amount of $25,000. Using this money the player proceeds through the events and the games by initially purchasing cheaper cars.

The entire game has been divided into four tiers. Within each tier several other race options are available such as the ‘daily drag’ and various bonus rounds. Players get the opportunity to race with members of the tier before becoming competent enough to race with the boss himself. The boss is officially declared as defeated only after the player has won three times from him. The game provides an enthralling chance for players to win the boss’s car just with one additional race after he has been defeated in the prior three races.

Fuel is required for playing each level however what must be kept in mind is that different races consume different amounts of fuel. The normal races take an average of one fuel per race however the ‘boss race’ consumes two. The fuel tank contains ten bars in total. Each bar refills on its own after a period of 6 minutes. Another option available for the big spenders is to purchase fuel and all other items by putting in cash using the Google Play Store. 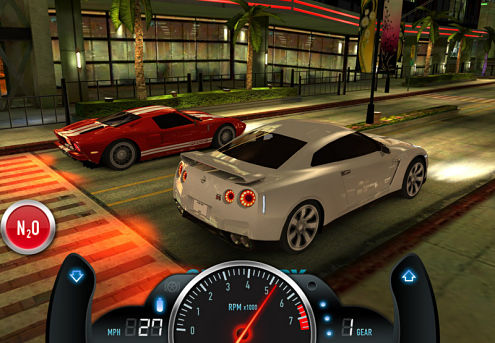 A certain barred meter has been set through which the ranking of the player in terms of levels is done. With each win the bar fills a bit and after winning a certain number of games when it gets completely filled up, the player is promoted to the next level. At this point the player is awarded a gold coin.

Several upgrades related to the car’s performance and its looks are available. Each upgrade has 5 levels in further. The initial three levels are comparatively affordable however the fourth and the fifth level of upgrades need some serious cash for which real hard work in terms of racing needs to be done.

The game provides an excellent opportunity for car lovers to fulfil their desires by racing cars from almost all renowned motor related brands. The game currently has an average rating of 4.6/5.0 with 119,841 downloads from the Google Play Store.

Gold coins are a real asset in this game. They are a substitute to the cash and all expensive super and hyper cars can only be bought using the coins. Also available is the feature of getting the fuel tank refilled using the gold coins.

A huge collection of cars is available for the players to choose from, according to their own needs and likes. Power, transmission and grip of various cars is given on the left side of the screen which allows the players to have a better understanding about what they want to have and what they can afford at the moment.