Phantom is a music control widget that is developed mainly for the WidgetLocker Lock Screen but the good thing is that it can be used on the homescreen also.

Phantom hides when no track is playing on your mobile phone. It is a self-hiding music control Android widget.

More you should see,
* All In One Messenger
* Controlling PowerPoint Slides remotely

The development of this app is itself an interesting story. The developer coded it for its ease. He changed the mobile from Sense to CyanogenMod, installed Widget-Locker and set it so that it behaves like the Htc Sense Lockscreen. But when the smartphone used to be in his pants, all widgets made him start playback when he did not want them to. So in order to overcome this flaw, he made Phantom that can hide itself when no playback is active.

• Current Track data and Volume Control elements can be removed or shown.

• Mode so that battery can be consumed minimal. In this mode, the battery is almost not consumed even a single percent.

• Third party apps are supported. If you are a developer, just go in Widget settings and check ‘Allow 3rd party apps to control music’ and you are done to add your apps. Also note that all the players are not supported and so for placing the widget, you should hold the finger on the homescreen.

• Inclusion of 7 themes out of which 6 are graphical ones. 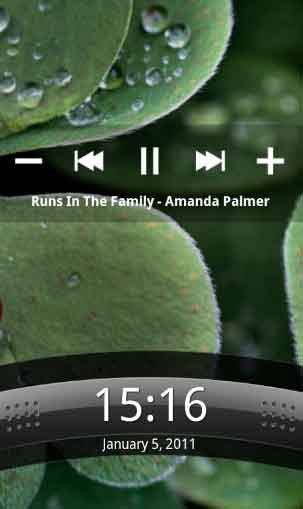