In my previous article, I shared you an Android game that allows you playing with your favorite cat Tom. Now, I am going a little further and allowing your tom to meet his nephew Ginger. Tom and Ginger when met, decided to have some fun and so both of them decided to go to a shopping mall and do some shopping. In the shopping mall, both met Santa and this was the first opportunity in their life to see Santa Claus.

Santa also becomes happy on seeing Ginger and he thinks that he will entertain and will himself have some fun with the little kid. But Ginger has more than that. Ginger is not an innocent kid but very mischievous one. Once he sits in the lap of Santa, he starts his mischief with the old man.

At many times, Tom’s nephew pulls the old beard of Santa and makes him annoy. At other times, he kicks him, puts his small fingers in his nose, ignites his lovely hat, give him some surprising gift, etc. 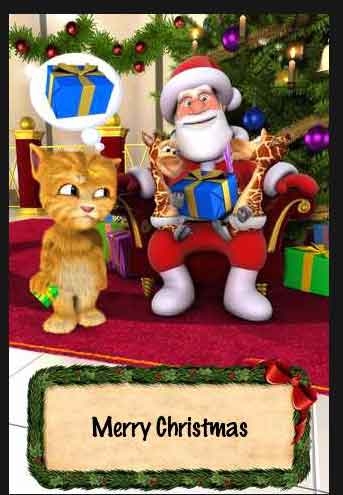 You can catch all the mischief of the little nephew with this Android app – ‘Talking Santa meets Ginger’.

When you will run the application on your mobile for first time, you will be asked to download some extra stuff so that you can enjoy the game with best graphics quality.

1. You need to talk to Santa and your wordings would be transferred to Ginger by him.

2. Poke Santa and see the hilarious activities that he does.

3. You can also poke the little mischievous Ginger.

4. You can poke the train and make it go leaving its track.

5. You can shake your phone and ring Christmas tree bell.

7. By pressing the paw key of cat, you can see Ginger annoying Santa.

8. Fire key will allow you seeing Ginger lighting hat of Santa on the fire.

9. With Card key, you can send the Christmas cards via MMS or email to your friends.

Please note that some users are facing problems on Samsung Galaxy 3 Froyo and Samsung Galaxy S 2.3 Android smartphones. The applications’ full features are not working on these phones.