All the smart phones face the same problem these days. No matter how much storage memory they have and how much RAM and ROM resides inside the gadget, the problem of slow processing and excessive overloading always haunts the users of these huge screened gigantic devices. The mammoths thus need something that can help them relieve a bit by making them lighter in terms of the memory use.

The Clean Master developed by Ksmobile is such an app that has the potential to do all such activities that you need, to turn your android smart phone device into a speedy gadget once again. Just by cleaning the cache on a regular basis and by performing certain other tasks, the Clean Master app will help you release a lot of memory and with this much free space to use, the performance is bound to show a marked increase.

There are over 10 million users of the app at present who all have shown a positive feedback towards the performance of the cleaning software.  With an overall rating of 4.8/5.0 one can easily realize how good the software actually is and to what extent it is loved by the users. On the Google Play Store the download has reached a mark of 508,960.

With support in as many as 25 different languages the app is loved amongst the general Android users. The availability of so many different languages has brought it a lot of fame and that is why it is now the number one cleaning app in 48 countries. Some of the languages in which the app can be used include German, Italian, Korean, Spanish, Chinese and Portuguese.

The recent version of the app was launched on 8th June 2013 and is 3.5.0. The latest version of the app provides certain additional features, which were being expected by the users to appear in the upcoming version. These include the support to move the app data to the external SD card, also the new app features several bug fixes. Due to the improvements, the popularity of the software is expected to show a further increase.

The history eraser feature of the app is remarkable and once you use it, you will surely feel the difference from all other such kind of apps present in the market. It is easy to use and very efficient. The App manager is also quite quick and grants access to get rid of apps just with a single click of yours. The ability to backup apps on SD card is also available, which can later be again used by transfer of the apps to the device.Privacy protection in the app provides you the freedom to delete only the selected SMS/MMS, log calls, history and the data present on the clipboard. 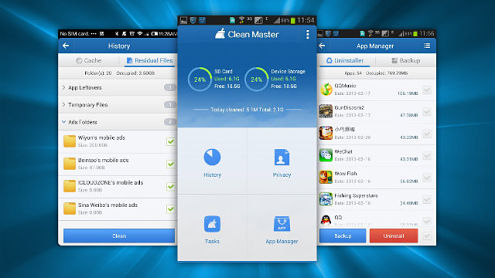 So if you are looking for an app that can speed up your slow and overloaded Android device instantly while maintaining your privacy and keeping your data safe, with a backup, then Clean Master is the perfect choice for you.